I was probably a year into speaking at conferences before I heard about “developer relations” (also called “DevRel”). It’s a relatively new field that blends software development and marketing, so many conference speakers get into DevRel (and vice-versa). This week’s featured speaker, Alex Lakatos runs a great newsletter for developer relations professionals called Developer Avocados 🥑 Weekly. In addition to that, he has a fantastic story about how he accidentally fell into speaking, so read on to learn more about Alex and his tips for technical speakers. 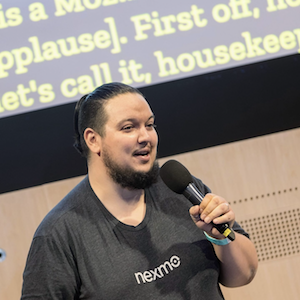 About 8 years ago, I was a JavaScript Test Developer working for an outsourcer in Romania (I happen to be Romanian), contracting for Mozilla. A friend was organizing this conference called Open Source Open Mind and wanted someone from our team to come to speak about Mozilla and how to get involved. I was terrified of public speaking, but luckily one of my coworkers, Ioana, said she’d do it. Ioana was in the US at a client on-site just before the conference though, so she asked me to do the slides for her. Naively, I accepted, thinking there’s no harm in it and it’s the least I could do since she was getting me out of having to be on stage.

The day of the conference rolls around, and we’re all in the airport early in the morning, waiting for Ioana’s flight to land. Just as the airport was listing her flight as “Cancelled”, we got a message from Ioana to go ahead to the conference, and stall as much as possible, she’ll be on the next flight and should be there in time for the last slot of the day.

Marcela, the conference organizer, being a friend, kept pushing Ioana’s talk further in the schedule. But the last talk of the day comes up, and Ioana is nowhere to be found. So Marcela goes up on stage and looks panicked at the audience, sees me in the front row, and just blurts out: “And now, talking about the Mozilla community…Alex is going to talk about the Mozilla community!“.

I was dumbstruck, I got on stage and I just sat there quietly for about a minute. And then I started talking and didn’t stop until the Q&A part. It was horrible, I had my hands in my pocket the entire time, I made a bunch of rookie mistakes. There is a video of it somewhere on youtube, luckily in Romanian, so not very popular. To this day I still use it as an example of ‘what not to do’ during my public speaking training. 😅

When the Q&A part came, people were a bit on edge, and every time someone bashed Firefox with their questions, I took a step into the audience. I think I finished the Q&A part literally in the middle of the audience, and trying to make a step to my left to go towards the last person that asked a question. That’s when I realized maybe it was time to end the talk, well over my allotted time slot.

That’s how I started speaking in public. A few weeks after that I was MCing one of the community events we had going, someone from the Mozilla Community team saw me and decided that’s what I was going to do moving forward. I got tons of mentorship from the Mozilla people, like Chris Heilmann, as I was starting out and it just encouraged me to get better and be on stage more often than in the audience.

The reason I speak at conferences is simple. I feel guilty about being privileged enough to have gone to a Computer Science University, so I try as much as possible to help other people get into tech, or get better at tech. Knowing I helped at least one person by being on stage and sharing my knowledge makes me feel a bit better about that.

I used to think public speaking was making me a better communicator, so it was helping me indirectly in my career as a JavaScript Developer. But about two years ago I got a job as a JavaScript Developer Advocate at Nexmo, and my community work and public speaking was the reason I got the job. So it helped me directly in my career, to the point its part of my day to day work! 😅

I don’t really have an exact number, but let’s go with “a lot”. For context, last year I’ve either spoken, attended, hosted or sponsored 40 events (not just conferences, but smaller meetups as well). If I had to venture a guess based on my slides repo on Github, I’d say I spoke at around 50 conferences and meetups so far.

Yes, and it’s a little embarrassing, to be honest. I get so nervous before going on stage that I can’t eat, drink or interact with people. There is this Psychology of Winning that tells you how to get into a winner mindset, and that calms down my nerves enough to get on stage and start talking. After the first minute or so practice takes over and I actually enjoy being on stage but let me tell you about getting there.

I usually find a quiet spot in the speakers room, or in the bathroom (I want to apologize to anyone who has heard my pre-talk routine), and I start imagining I just won (dunno what, but the point is I’m a winner now!): pump my chest forward, straighten my shoulders, raise my fist in the air, grin widely, maybe even shout a few “Hell yeah!“s if I think the toilet it empty (spoiler alert: it rarely is as empty as I think). That makes me think I just won something, I don’t need to win on stage as well, and it calms my nerves enough so I don’t shake as I speak.

There are so many things I can list, it’ll just end up being another blog post just for this question. I think there are a lot more resources out there now compared to when I started, so my advice is just “practice”. No one did great the first time they got on stage or the second one, but practice makes perfect. So look at your presentations, identify the areas you could have done better (be it slides, content, posture, delivery), and then find the next conference or meetup where you can practice your talk some more and improve on those points.

If you’re looking for resources on public speaking or want to take the plunge and become a Developer Advocate, I co-curated this newsletter called “Developer Avocados 🥑 Weekly”. If you subscribe, you get a bunch of highly curated articles from the past week in your inbox every Monday, along with a few conferences CFPs that support speakers with travel and accommodation.

Are there any other speakers you look up to?

When I started out Chris Heilmann and Robert Nyman helped me and inspired me a lot.

Today, I think one of my favorite speakers is Simona Cotin. I like her Serverless talks a lot, the live coding with a fallback to recordings is something I keep telling people they should do more of in their talks.

If you’re a tech conference speaker, email [email protected]land.com to tell your story. 💌